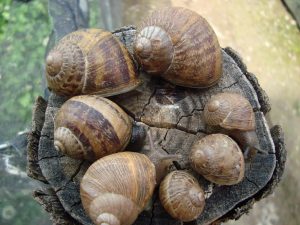 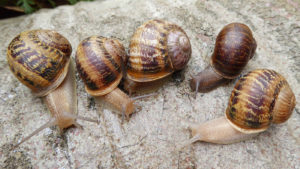 Snails called “chochlii” in Crete and “caraoli” in Cyprus, belong to the gastropods. The consumption of snails has been known since antiquity. Snail shells have been found in archaeological excavations, an indication that snails were eaten since prehistoric times. It has been found that since the Paleolithic era, molluscs have been an important source of food for humans. In Greece and Cyprus snails have been known since antiquity and are considered to be a fine delicacy. Fossils of snails have been found in archaeological excavations after thousands of years in Akrotiri, Santorini and Paphos, Cyprus.

Ancient Greeks loved the snail both gastronomically and scientifically. During the Minoan period the snail was a nutritious and popular dish for the Cretans and then for all the ancient Greeks. Aristotle described the snail in detail and invented a kind of spoon, which carries a spike to the tip of his grip, where the snail’s body can be removed intact from the shell. Hippocrates studied the properties of slime mucus and praised its effectiveness in hydrating the skin, relieving skin irritations and redness, wound healing, and treating skin disorders. He also considered their consumption beneficial for various stomach disorders. Hippocrates and Galen considered snails to be beneficial for the treatment of herniation and hypersensitivity.

The ancient Greeks had noticed the behavior of snails during the courtship phase where each snail launches its arrow to stimulate the other’s genital area. It is said, therefore, that the view of the wandering god of love, Eros, who throws his arrows on the lovers, comes from this observation. Athenaeus in “Deepnosophists” also refers to snails, while Alexis the comedian mentions them as an aphrodisiac food. Together with Athenaeus, doctor Iraklides Tarantinos agrees in the “Symposium” that snails help to produce semen. Also, the helical shape of the snail shell inspired Archimedes, who invented the astonishing screw-blow mechanism. For the ancient Greeks, snails found on the edge of the stem of plants, was a sign from the Gods that they could now harvest their crops.

In ancient Rome, snails were kept in special gardens for fattening. It is also reported that the Romans chose the best and bigger snails as the parent.
Historically, they were eaten throughout the Mediterranean, but the Romans were the ones who made them a luxury food.
They considered snails a fine food, as reported in Pliny’s writings. In fact, he recommended them for stomach pains and bleeding.

Since the mid–19th century, snails are consumed in many European countries, with France being the most important.